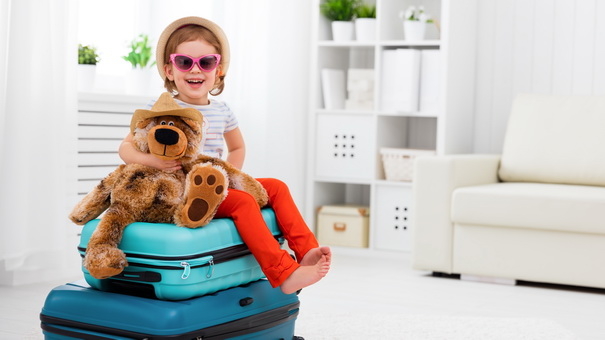 Think back to what you loved most about your latest family vacation. What’s the first thing that comes to mind? Maybe you enjoyed teaching your kids about new places, new cultures, or the history of the destination you visited. Or perhaps you were just tickled to give your kids some undivided attention without work or life getting in the way.

What you may not have considered, is the fact that any kind of travel can be a learning opportunity — even if it’s not too far from home. This is particularly true when it comes to lessons about money, because travel requires so many financial decisions.

If you’re angling to broaden your children’s perspectives on money, keep an eye out for learning opportunities that may be less than obvious. Here are some lessons your kids can pick up no matter where you go.

1. The importance of budgeting and tracking spending

No matter how careful you are when you set your travel budget, it’s easy to let your spending get out of hand. You’re away from home and on a different schedule, and you’re probably around food, souvenirs, and constant temptations to spend.

That’s why a family vacation may be the perfect time to introduce your kids to the concept of tracking your daily spending — it’s one of the best ways to stay within your travel budget. To get your kids into this mindset, you just need to set a daily spending limit, then clue your kids into how it works. (See also: 7 Fool-Proof Ways to Stay Within Your Travel Budget)

My husband and I typically take our kids on a three- or four-week trip to Europe every summer. On these trips, we set a daily spending limit to cover food, souvenirs, and snacks. While the spending limit depends on where we are, it’s usually enough to cover one meal “out” per day and a daily splurge like gelato or candy. We eat the rest of our meals in our condo or hotel.

This really annoys my kids (ages six and nine) sometimes, but I explain that we have a budget for the entire trip and the only way to stay within our budget is by breaking it down by the day. They don’t always like when we’re in our hotel eating sandwiches for dinner, but they do understand why we do it.

Tanner Calais, founder of Cruzely.com, says cruises are another opportune time to teach kids about spending and credit, since cruise lines have you charge all your expenses to a key card tied to your account. The system is similar to credit cards in that you’re using “invisible money” to buy things, and you pay your bill at the end of the cruise. “This is a great opportunity to introduce kids to the power of credit cards and how they work,” says Calais.

For instance, it can be tough to track your spending when you don’t see it because you’re using a card. By forcing the kids to watch you keep track of your daily purchases with a notepad or your smartphone, you can help them see how spending can add up over time. “It’s also not free money simply because cash doesn’t come out of your wallet when you buy something,” he says. (See also: 6 Money-Saving Items to Bring On Your Next Cruise)

Here’s another lesson kids need to learn: Money is a finite resource.

Eileen Gunn, founder of the blog Families Go Travel, says this is one lesson her child has learned by bringing her own souvenir money on vacation. Having her 10-year-old daughter bring her own stash of cash to spend has helped her learn that “you can’t have everything you want,” says Gunn.

For example, if she has $20 to spend on a trip and sees something she wants for $20, she has to decide whether she wants the item badly enough to spend her entire budget on it. She also has to make peace with the fact that she won’t be able to afford anything else she wants for the duration of the trip.

Gunn says she has occasionally loaned her daughter money when she was desperate to have another souvenir, “but it has to be something really worthwhile.” Also, Gunn makes her repay the loan as soon as they get home from their trip. The entire process “makes her a more discerning consumer,” says Gunn.

4. The power of compound interest

Travel blogger Kevin Payne, founder of Family Money Adventure, offers the perfect example of how you don’t have to travel far to teach your kids about money and finance. Recently, part of his family had an epic staycation in their hometown of Cleveland, Ohio while his two older kids were in New York City. They visited the Federal Reserve Bank of Cleveland, including its Learning Center and Money Museum.

Payne says he and his children learned many money lessons during the trip, including the history of bartering and why money is a better system of exchange. But that’s not all.

“I think the biggest lesson they learned was the importance of saving money and the role of interest,” he says. The museum accomplishes this goal via a staircase to its second level that illustrates the power of compound interest on every step.

“Each step represented a year more of interest so the kids could see how much money they would end up with after a 20-year period of saving,” says Payne. “It was such a great way to illustrate how quickly savings can add up.” (See also: 10 Investing Lessons You Must Teach Your Kids)

5. The power of negotiation

In some countries, local markets provide a powerful lesson in bargaining. Travel blogger Shannon O’Donnell, founder of A Little Adrift, has had periodic custody of her niece, and she has used that time to travel with her and teach her about money.

O’Donnell says that, while they were in Thailand, Laos, Cambodia, and Myanmar, her then 11-year-old niece learned to critically evaluate the cost of something she wanted, plus how to respectfully bargain if she wanted a better deal.

“She would use this skill at the local markets if she wanted to buy a souvenir and became quite good at disarming them with a smile as she politely asked for better deals,” says O’Donnell. “Overall, by learning that some cultures bargain for better deals, it has allowed her to consider the value of her purchases and how she spends her money even when back home in the states.”

6. How you can save money while still having fun

While travel isn’t typically cheap, there are still plenty of ways to save. Blogger Lee Huffman of Dads Who Travel says he uses travel to teach his kids that you can save money on some aspects of your trip and still have a blast.

One strategy he uses to impart this message is booking accommodations that have some sort of kitchen. This allows them to save money on food by buying groceries. “For example, on our last trip to Orlando, we stayed at a timeshare property that offered a mini-kitchen with a fridge, microwave, and two-burner stove,” says Huffman.

They still have a boatload of fun on their trips, but he goes out of his way to explain to his kids why dining out for every meal would make each trip cost considerably more.

7. Be grateful for what you have

Corinne McDermott, founder of Have Baby Will Travel, says travel has helped her kids understand how fortunate they are. During her family’s frequent trips to the Caribbean, they often talk about how people’s homes are different and how the children appear to have fewer belongings. Yet, the people they meet are still happy and thriving.

“We’ve been fortunate to meet and socialize with many locals on our travels, and they work hard and are as proud of their homes and families as we are of ours,” says McDermott. “Occasionally we all need reminders to be grateful for all that we have, no matter how it compares to others next door or across the world.”

8. Being able to travel means parents have to work

Family finance writer Catherine Alford agrees that travel offers an endless number of opportunities to teach your kids about money. However, the most important lesson she wants to teach her kids is that, in order to travel, Mom and Dad have to work. “I’ve been teaching them the connection between hard work and purchases since they were babies,” she says.

When her children were two years old, Alford and her husband took them on a monthlong European vacation where they visited five different countries. Since she works remotely as a blogger and freelance writer, Alford had to work throughout the trip. “I kept reminding them that we were able to travel because Mommy was working,” she says.

9. Experiences are better than things

For many families, prioritizing travel means they need to cut back on other kinds of purchases in their everyday lives. Those are often sacrifices they’re happy to make. Shannon Austin, senior communications director at the Center for Financial Services Innovation says one of the biggest lessons her family has learned from travel is that they can have amazing experiences if they maintain a reasonable lifestyle.

Austin and her children had the opportunity to live in Germany for three years when her oldest was six and her youngest was two. Once they moved abroad, she says she told her kids that they planned to “live small so they can experience big.” Over the three years they spent in Germany, they took 36 trips to destinations including Slovenia, Croatia, Greece, Portugal, Spain, Italy, and Austria.

“My oldest delights in noticing some flowers that remind her of the plants growing over terraces in Ronda, Spain; my youngest recalls riding donkeys in Santorini. They remember filling water bottles on the roadside at a waterfall in Norway; they remember hikes in the Franconian part of Germany,” says Austin. These memories are priceless, she says, but they were only possible because her family prioritized travel instead of “stuff.” (See also: 4 Reasons You Should Splurge on Experiences, Not Things)

Travel can also help teach your kids how money works around the world. Tracey Carisch, author of the upcoming memoir Excess Baggage: One Family’s Around-the-World Search for Balance, says her children gained firsthand experience in how currency works when they traveled nomadically for 18 months.

Carisch says her oldest child began to understand how different types of currency work when they arrived in South Africa from Ethiopia. They found a currency exchange booth at the airport and went to exchange their remaining Ethiopian birr for South African rand. As she was talking to the cashier, she mentioned to her daughter that they made a little money on the trip due to the favorable exchange rate.

“My daughter’s curiosity was piqued and she started peppering me with questions,” says Carisch. “Within five minutes, she understood the concept behind currency trading and cross rates. She researched it on Forex and came up with a home-school module for herself based on reading currency pairs and calculating spreads.”

Carisch also says her child “doesn’t even like math.” This just goes to show how powerful travel can be when it comes to learning about money and math. You can learn and forget almost anything in a classroom, but real world experiences teach lessons that last a lifetime.