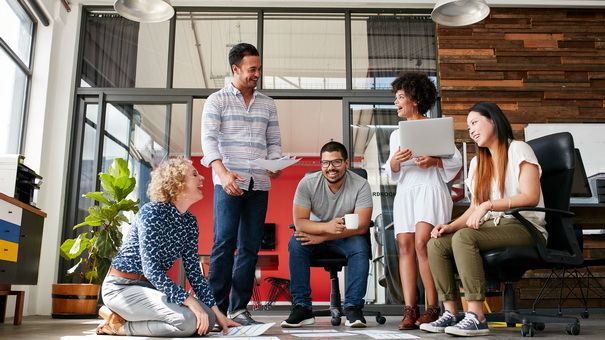 When you work for a company, you soon get to know its culture. Sometimes it’s fantastic; everyone gets along great, and you pinch yourself to see if you’re dreaming. Most of the time, however, company culture is in need of some improvement, if not a complete overhaul.

This is where you can help. Even if you’re not the one in the corner office, you can still have a positive impact on your work environment and company culture. Here’s how.

One of the worst aspects of any company culture is the rumor mill. Almost every place of employment has it. If you’re not the boss, and it’s not your place to put your foot down about stopping the spread of gossip, you can at least do your part to limit how far it goes.

The best way to do that is to stop feeding into it yourself. Don’t lean in at the water cooler when voices turn to whispers and someone is talking about a co-worker. Don’t engage. Simply say you’re not interested, and walk away. You may not be able to wipe it out entirely, but by becoming a positive influence, you may inspire others to avoid it as well. (See also: 8 Career Moves That Prove You’re Finally a Grown-Up)

2. Look at “bad” projects with a fresh perspective

Something I have personally learned from my 20+ years working in advertising is that there aren’t bad accounts. What happens is that the people working on them become jaded, relationships are strained, and they become awful to work on. Then, a new hire comes in and suddenly that account is turned around for the better, simply because the newcomer had no history with it. Use this perspective to your advantage.

What projects are just awful? Which tasks are dreaded? Which people seem to just collapse when they hear the name of a certain client or account? Take a look at it with fresh eyes. Why is it bad? Are people actively making the situation worse with a negative attitude? What can you do in the next week to turn that ship around?

3. Get in earlier and leave a little later

Remember the zip and zeal you had for the job when you first arrived? You couldn’t wait to get to your desk and dig into the work day. After a while, that get-up-and-go has got up and left, and you’re probably like most other people now. The same routine. The same habits. Why not change it up and go back to the attitude you had during the first few weeks?

Get in earlier, and be the first one to make the coffee for everyone. Do the rounds and say hi to other people as they come in (it’s amazing what a friendly smile can do to lift anyone’s spirits). Hang out a little later than usual, and when you do leave, do so with some pep in your step. You’ll be surprised at how infectious your new lease on life will be. (See also: 10 Small Gestures That Go a Long Way at Work)

4. Strive for the culture you want to have

You know that adage, “Dress for the position you want?” Well, the same applies to company culture. Rather than accepting that this is the way it is, make your actions fall in line with the culture you’d rather have.

Admittedly, it’ll be baby steps at first. You can’t suddenly start working from home three days a week when the policy is dead set against it. But you can make small changes that can incrementally lead to bigger ones.

For instance, some places like to get all the employees together on a Friday evening to mingle, with drinks and snacks provided. Why not ask if you can start something like that? Get people interested in providing refreshments as a group effort. Do it after everyone’s work is done. This simple act of togetherness could impact the morale and thinking of the whole company.

It’s incredibly easy to voice a negative opinion about something. How many times have you seen a political party rant and rave about a policy they don’t like, but come up with empty rhetoric when asked to give a real solution? As we all know, building something up is way harder than knocking it down, so don’t bring a sledgehammer to the debate.

Instead, look at what you think is wrong and find ways to give solutions to the people at the top. This could be through your manager, human resources, or even a company suggestion box. Writing, “The dress code here sucks” is nowhere near as effective as writing, “Let’s dress in casual clothes, but have a smart outfit on hand in case of client meetings.”

There is strength in numbers, and that could not be more true for shifting the corporate culture. If one person comes to the boss asking for more paid sick leave, it’s just one voice. If it’s half the company, the boss will sit up and take notice.

Find people who believe in the same changes and improvements you do, and get organized. Make regular petitions to the boss for small but important changes that would improve the morale of the whole company. When the boss gets the chance to make everyone happy and look good, without forking over an arm and a leg, they’ll do it.

This ties in nicely with the last point, but it’s worth noting that your own bugbears are not going to be a good enough reason to make any significant changes. Maybe you loved working remotely two days a week at your last job, but if this current company doesn’t allow that for anyone, they’re not going to make an exception just to please you. Saying, “I work better with music” is not going to fly if no one else wants to hear music all day. Instead, find a way to make your personal case one that doesn’t require big changes — like, for example, asking if you can wear headphones.

The first time you cook any kind of meal, it’s not going to turn out perfect. Imagine your reaction if the person you made it for said, “This is dry, has way too much salt, and it took you hours to get it done!” Chances are, you’re not cooking for that person again any time soon.

It’s the same with management. They’re people, not faceless entities. When they see a problem and do what they can to try and make it even a little better, let them know. Sure, the pot luck was poorly organized, few people came, and there wasn’t enough time to enjoy it. Praise the positives, with suggestions on how it can be even better when they try again. Encouragement goes much further than scorn.

9. Work your magic with people who have influence

You’re not the boss. You may not even speak to the boss on a weekly basis. However, you will almost certainly know someone that does, and you can use that to your advantage.

When you see them in the break room, make time to sit down and have a chat. Talk about what you would do to make things better if you had the boss’s ear. Provide suggestions that this contact can use as his or her own, and in turn relay them to the decision makers. It doesn’t matter who takes credit for a better culture. The reward is the culture itself — not the accolade of changing it.

10. Know why the culture changes you want are required

Some of the greatest company cultures in the world are envied by us all. However, they’re not appropriate or doable for every company, and asking for something totally out of reach could sink any chances you have for small successes.

For example, Walt Disney Parks and Resorts regularly makes the list of one of the top places to work in the world. Remember though, they are in the business of happiness and fantasy, and many of their company policies are not going to go over well in a manufacturing plant or accountancy firm.

Look at your business and see what can be done to improve things for good reason. A generous vacation policy is valuable everywhere, as is an on-site gym, corporate discounts, and 401(k) matches. If you say you want all-you-can-drink soda and snacks for free, and a massive entertainment system in the break room, you better be able to back that up with more than “Because it would be cool.” (See also: 5 Ways Employee Perks Are Good for Business)