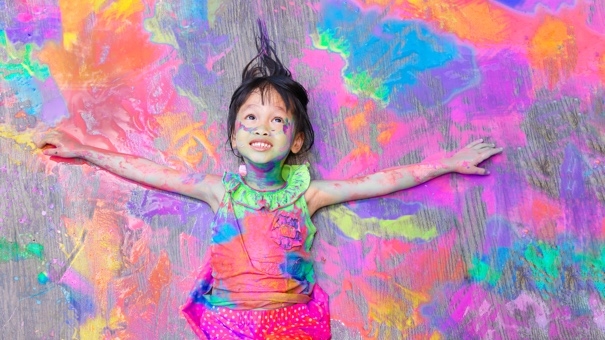 Maybe you have a kid stuck at home because they’re not old enough for school yet, or maybe they’re home with a cold, or it’s a snow day. It doesn’t matter. This list is jam-packed with ideas to keep them occupied and fully entertained all day long, without a huge, sticky mess to clean after it’s over. (See also: 50 Fun Things to Do When You’re Stuck Inside During Winter)

1. Get pointillistic with dot markers

Dot markers have been around for a long time, used primarily for playing Bingo. I’ve found the best deals at the local dollar store.

Use them to create connect-the-dots or to draw on plain paper. You could also have the kids try a crash course on pointillism, a cool art technique that involves a lot of dots. They can use the dot markers to create their own pointillistic masterpieces.

Your kiddo can be a cartoonist. First, print out blank comic strips or draw your own comic strips by marking out the lines on plain paper. Use a ruler to get them straight.

Then they can use colored pencils, washable markers, or pens to draw and color in their own comic strips. Encourage them to make up new characters going on amazing adventures, or suggest that they simply draw out stories based on their own daily lives.

3. Make (and play) a ringtoss game

You can make a ringtoss game out of almost anything (just make sure it isn’t sharp, or hard, or breakable). You’ll need things that are ring-shaped or that you can bend into a ring shape, like pipe cleaners. Then you need a target: something thin and tall enough for the rings to slide over.

To play, have your kids set the target up and take two or three big steps back from it. They toss as many rings over the target as they can. You can make it more interesting by adding in extra challenges, such as a time limit, smaller rings, or having them stand further away from the target.

4. Create your own board game

Your kids get to design the whole game: characters, the goal, the board, and the rules.

Have them start by deciding what the goal is: how can someone win the game? Do they need to get a certain number of points? Or go all the way around the board? Then have them set some rules: do they roll dice or use a spinner? (They can use parts from other board games you own — such as dice or an hourglass — for their new game.)

Suggest that they use whatever they can find as raw materials. For example, draw the game board on a piece of cardboard, cut paper into cards, create characters or game pieces out of modeling clay, or use tiny toys they already have.

Start with some simple shapes for origami. There are a lot of YouTube tutorials, for example, a ninja star or a baby chicken or a water bomb. (Obviously you should start with the water bomb.) When they’ve mastered a couple of the easier tutorials, have them try some harder shapes.

Hit up the recycling bin for empty plastic bottles and cardboard boxes. The thin cardboard is best, because it’s easier to cut.

They can build the structures of their town by cutting, stacking, and combining boxes and bottles. Cut out or draw on doors and windows. Washi tape or masking tape can be used to attach the structures together. Colored tape can also be used to designate roads through their very own tiny towns.

Start with a hard surface (like the floor) and use toys and books to create a racecourse. Your kids can put in little obstacles; they should be small and light so the marble won’t be stopped completely. To start the marble on its run, cut cardboard tubes (from toilet paper or paper towels) in half. Tape them together to make them longer. Stack one end on books or a table and make sure it slopes down into the beginning of the racecourse.

If they have some toy cars, they can make a custom track, with jumps and challenges, out of almost anything. My kids use stools or a stack of books and then pieces of cardboard, small boxes, or big, flat books to build ramps and jumps.

They can even come up with tunnels and create obstacle courses. If they have blocks or Legos around, they can build some structures or tunnels for the cars to go through. Or demolish. That part is entirely up to them.

The idea of this game is for your kids to come up with their very own advertisement for a made-up product. So, to start with, have them come up with a product that they want to “sell.” It can be as stupid or silly or serious as they want it to be.

Next, they need to come up with some ideas about how to advertise it. Maybe a story, or act out a scene, or perform a song. They can use costumes, props, a whole scene. My kids like to video their ads and then review and improve them. Or just laugh at them.

10. Make a music video or do karaoke

They should select their songs, decide on a script or choreographed dance if they’re making a video, or just sing and dance their hearts out. Costumes and props make this extremely fun and allow them to be more immersed in the music.

A scavenger hunt can work inside or outside. You can come up with your own list and have them hunt around the house for them, or they can come up with their own list of ideas. They can decide to hunt as a team or go separately as a competition. Set a timer to make it more challenging and exciting.

The kids will need a timer for this. They should start by finding five to 10 small objects: a marble, a toy car, a spoon, etc. Spread them out on a tray and look at them for 30 seconds. Then move the tray somewhere they can’t see it and have them try to remember all the objects on the tray. They can write a list or draw a picture of each one. How many did they remember? If they got them all, add more objects, or start with a completely new set. Make it more challenging by giving them less time to look at the objects on the tray (try 20 seconds, and then 15).

Kids can use any sort of building toy for this. Blocks or K’Nex or Magnetos will work just as well as Legos. First, make a list of 10 to 15 things they want to build. Or check out these printable Lego challenge cards for inspiration.

To do the challenge, choose something from the list to build. Then start building. They can use a timer to see how quickly they can build it. Or they can take their time and do the best possible job.

This is fun to do with friends or siblings. Make some paper fortunetellers by following these instructions.

Or, for a simpler version, you can play a game from my childhood (I know, right? So old.) called MASH. All you need is a piece of paper and something to write with. Here are the full instructions.

Get their inner architect to work with dry pasta. Seriously! They’ll need dry spaghetti noodles and mini marshmallows. Gumdrops work too, if you’re low on marshmallows.

16. Make a felt board and pieces

You’ll need felt, some cardboard, and scissors. To start, have the kids cover a cardboard with felt, then staple or carefully glue it on. They could use a few different colors of felt to create a background or setting. Maybe a green strip for grass on the bottom, and a gray triangle for a mountain.

Next, they can cut out shapes with the rest of the felt. The felt shapes will stick to the felt board, so they can use them to create characters, settings, buildings, and all sorts of other stuff on the felt board.

Need some more ideas? I got this method from a writer named James Altucher, and it works well. You can do this or have your kids do this if they’re bored.

First, think of a problem or a question, like “What are some cool things I can do by myself?” or “What could I do when I’m bored that won’t get me in trouble?” Then make a list of 10 ideas that answer your question. Don’t stop at five or six. Your brain will want to. Don’t let it be lazy. Insist on 10. Your brain saves all the really good ideas for eight and nine and 10.

If you make one list, you can make another one. What’s another question? How about, “What can I do with my friends?” or “What are some things I want to learn about?” or “How can I not be bored?” Make another list for each question. Make 10 lists! Now you have 100 ideas. (See also: 25 Ways to Entertain Your Child for Free or Cheap)