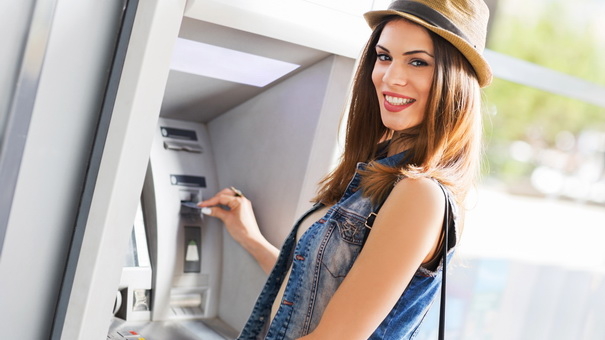 Now that you can pay with Facebook Messenger and selfies, it seems that you no longer have reason to ever visit your bank’s ATM again. In an effort to entice consumers back to the ATM, financial institutions are making serious investments to upgrade cash dispensers in big ways. Here’s what you can soon expect coming to an ATM near you.

1. Deposit checks without an envelope

There was a time when payday meant a mad rush to the nearest ATM to deposit a check so it would clear on time to make your payments. Back then, you had to properly insert your check in an envelope and fill out a deposit slip. Nowadays, more and more banks are offering no-envelope ATMs with insertion slots for checks. Equipped with modern scan technology, these new ATMs can accommodate a stack of several checks and provide instant proof of your deposit with a printout of your check on a printed receipt.

2. Get cash using your smartphone

Using the smartphone app from your bank, you may be able to get “cardless cash” from select ATMs. Here’s how it works: Open the app, set up a pre-staged withdrawal to create a QR code, and scan that code at participating ATMs to collect your cash. Some bank apps generate a code instead of a QR code and you punch in that code at the ATM.

Besides saving you time, cardless cash also keeps your ATM card safe from illegally-installed skimming devices. Since your card isn’t read, there’s no way for somebody to get a hold of your card’s number, expiration date, or security code. (See also: Credit Card Fraud and How to Avoid It)

3. Interact with an eATM — not an ATM

In a bigger push to further integrate their ATMs with smartphone apps, banks are working to redesign their cash dispensers to have the look and feel of a giant tablet. The objective is that the ATM screen looks and feels like a natural extension of your bank’s smartphone app, turning the ATM into an eATM.

Some banks are currently experimenting with the near field wireless communication feature in smartphones so that customers won’t need a code or QR code to get cash in the future. Imagine just holding your smartphone up to the ATM and getting instant cash. Another feature that some banks are experimenting with is the ability to allow videoconferencing with bankers, effectively expanding the range of services that customers can receive at an eATM.

4. Withdraw larger amounts without talking to a bank teller

One reason why fewer people were visiting ATMs was that they often couldn’t take out enough cash to cover a major expense, such as rent or a car loan payment. Many banks took notice of this through customer feedback and are now allowing customers to withdraw larger amounts than the regular limits. For example, one bank in New York City is letting its customers withdraw up to $3,000 at ATMs located in bank branches and during branch hours. That’s three times what most banks in NYC allow, and six times the regular limit in other cities.

ATMs typically only pay out in $20 bills. But sometimes, you just need $16 to pay a friend or don’t even have $20 in your account until the next paycheck comes around. In the near future, more ATMs will give customers a break and let them customize their withdrawals entirely. (See also: 5 Sales Strategies Your Bank Uses to Make Money)

Few things are as frustrating as standing in line for 20 minutes to withdraw cash to pay a bill that is due in a few hours, only to find out that the ATM is out of bills! Many banks are looking at ways to recycle cash deposits to minimize the possibility of the machine running out of bills. This feature is critical for banks promising their clients that they can customize their withdrawals.

As the ATM gets a much needed upgrade and leverages features from your smartphone, keep an eye on upcoming changes to your bank’s ATMs that can help you streamline your finances — and make sure not to lose your smartphone!