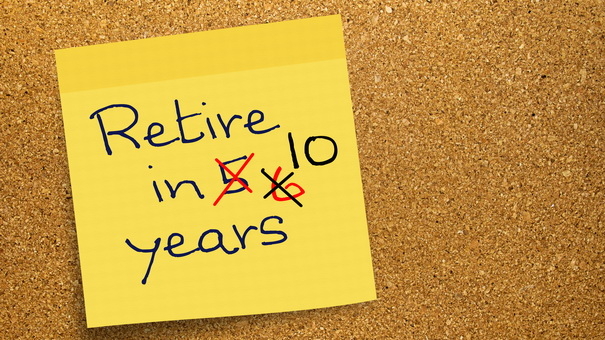 How often do you dream about retirement? It’s nice to think about the day when you can stop answering to a boss, and instead spend your time relaxing, traveling, and enjoying life to the fullest. Well, if you want that dream to become a reality, you may need to make some significant life changes now. If you’re guilty of the following things, you could end up working well past your planned retirement age. (See also: How Much Should You Have Saved for Retirement by 30? 40? 50?)

Most people vastly underestimate the amount they need to stash away for their golden years. The problem comes from the fact that many financial planners will tell you to put between 10 and 15 percent of your income toward retirement. However, that assumes you started saving in your 20s.

If you are now 40, and only started putting money away 10 years ago, you need a higher savings rate in order to make up for those missing years. In fact, you would have to put around 25 percent of your salary away each month and work until you’re 70 in order to make up for the shortfall. And as always, compound interest is the real key to saving. By missing out on those years in your 20s, you will have significantly impacted your future nest egg. (See also: How to Start Saving for Retirement at 40+)

2. You aren’t taking advantage of your employer’s 401(k) match

Simply put, any kind of match that your employer gives you is free money, and it would be silly not to take advantage of every cent. The average match out there is 3 percent of your pay, although companies can vary greatly on what they offer. This means that if you only put in 2 percent of your salary, you are leaving 0.7 percent of your income on the table. It may not seem like a lot, but that can really add up over time.

If your company offers you 50 percent on the dollar for up to 6 percent of your pay, you should be putting 6 percent away. If it’s a dollar amount match, say $2,500 per year, make sure you put in at least that amount. (See also: 5 Dumb 401(k) Mistakes Smart People Make)

3. Your plan is not aggressive enough

Most 401(k) plans have something called a “target date” that is used to figure out what your retirement portfolio will look like. If you have 30 years to go until retirement, you will almost certainly want at least a moderately aggressive portfolio. This will be comprised primarily of stocks, which offer higher gains, but are more volatile and can lose their value quickly. However, the stock market will always recover over time, and if you have that time to spare, this is the plan you should use.

If you have less time to go until retirement, your portfolio will have way less stocks in it, opting instead for a larger percentage of bonds. These are much safer, but they don’t have the ability to make as much money as stocks. If you came into the retirement savings habit late, you should talk to a professional about how to organize your portfolio. You simply may not have enough time to make money with a conservative plan, but could also risk losing money with a more aggressive one. (See also: Start Planning Now for When Your Target-Date Fund Ends)

4. You’re spending too much of your disposable income

A coffee here. A magazine there. Eating out every week. These small expenditures really add up, and instead of saving the money you’ll need to survive after you stop working, these frivolous buys are burning holes in your pocket.

Yes, life’s little luxuries are important for your morale and self-esteem from time to time, but get a handle on those expenses and budget accordingly. You may find that you’re spending $40 a month just on coffee. That’s $480 a year. Let’s say you plan on retiring in 30 years, and you stop getting that morning coffee for one year. A good rate of return on retirement investments is about 8 percent. Thirty years down the road, that $480 will become almost $5,000. If you cut your daily coffee out entirely, it will add over $63,500 to your retirement fund in a 30 year period. Now think about it: Is that “luxury” really worth it? (See also: 7 Effortless Ways to Prevent Budget-Busting Impulse Buys)

5. Social Security benefits alone will not be enough

It seems unfair that we pay into the system all our working lives, and when it comes time to retire, we get very little back. But, that is simply the result of a population that is living longer, yet retiring at the same age of 65. There just isn’t enough money in Social Security to totally support you unless you have almost everything completely bought and paid for by the time you retire, and even then, it will be tough going.

Right now, benefits for retired workers average around $1,374 per month, or just over $16,400 annually. When you consider that the federal poverty line is currently $12,060 for a one-person household, that’s a little too close for comfort.

While it’s possible to survive on that, barely, you have to ask yourself: Do you really want to spend the last 20+ years of your life scraping to make ends meet? (See also: 6 Smart Ways to Boost Your Social Security Payout Before Retirement)

It’s so tempting to dig into the equity in our homes, especially when the housing market is strong and interest rates are so low. But, every time you refinance your home to take out money, and start another 30-year mortgage, you are seriously impacting the quality of your retirement.

Ideally, by the time you retire, you’ll want that home to be paid for; no mortgage left, only taxes and maintenance. But if you are 40 years old and just did a 30-year refinance to take out some cash, you’ve ensured you’ll be paying that mortgage until you hit 70. Not only that, but every time you do a cash-out refi, you’re spending money on fees.

If you must refinance, consider doing a 10 or 15-year fixed rate term instead. Get that mortgage paid off quickly. You’ll also pay thousands less in interest over the life of the loan. (See also: 3 Times a Refinance Is the Wrong Move)

7. You’re not aiming to become a millionaire

When people start tucking away money for retirement, they don’t really consider the lump sum they are going to need when they eventually stop working. And ask any average Joe if they will be a millionaire one day, and they will laugh at you and say something like, “Yeah, right!”

But, everyone should be doing what they can to become a millionaire in retirement. While it may not be possible to hit that figure exactly, you should still aim as high as you can.

It’s commonly advised that by the time you hit retirement age, you should have at least 10 times your current salary in your retirement account. With the current median income hovering around the $60K mark, that means that you should have just over half a million dollars in your fund if you retire this year. If you’re a higher earner, let’s say you earn $120K a year, that figure should be over a million. (See also: Here’s How Far $1 Million Will Actually Go in Retirement)