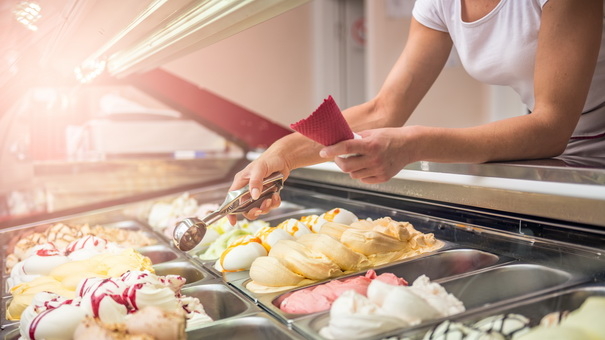 Singer, actor, author, business tycoon — everyone still starts somewhere. And while some people have the luxury of starting with wealth and fame behind them, others have had to scrape their way to the top. If you think millionaires and billionaires have always had it easy, think again. Many of them have worked jobs that may surprise you.

You probably know him as Legolas from The Lord of the Rings, or Will Turner from Pirates of the Caribbean. And although he’s considered one of the sexiest men in the world, Orlando’s first job was not exactly “sexy.”

He was just 13-years-old when he took this job at the shooting range, and by all accounts, he loved it. “I was a clay trapper,” he said in a 2006 interview. “People would go clay-pigeon shooting on the weekends, and when they said ‘pull,’ I was the one who released the pigeon. It was wild.”

Today, Orlando Bloom has a net worth estimated at $35 million.

One of the most successful women in the world started her working life as many of us do — at the local grocery store. Oprah recounted her time working at the corner store for Oprah.com, part of the vast empire this billionaire businesswoman has created.

“I wasn’t allowed to talk to the customers, and can you imagine for me? … That was very, very, very hard.”

She was in her early teens when she took the job in Nashville, but by the time she hit 16-years-old, she already had her sights set on broadcasting. She then landed a job reading the news at Nashville radio station, WVOL. The rest, as they say, is history.

In 1992, eight years after his computer company Dell was founded, Michael Dell became the youngest CEO ever to run a Fortune 500 company. He attributes his success to hard work, dedication, and doing whatever it takes to make your dreams happen.

For the 12-year-old Michael Dell, that dream was to own a stamp collection. So, he took a job washing the dishes at the local Chinese restaurant — a job that, as you can imagine, was long hours for little pay, even for a boy not yet a teenager.

But great oaks from little acorns grow, and just a few years later, he took apart an Apple computer to see exactly how it worked. His next dream was much more ambitious. And he achieved it.

Before he rose to fame, Rod held a couple of odd jobs, including newspaper deliverer and grave plot measurer. But before that, he had another unusual job that was short-lived — wallpaper screen printer.

After dropping out of school at age 15, Rod worked printing the patterns on wallpapers. For some, a job like this could be a creative outlet. For Rod, it was never meant to be. Rod Stewart is colorblind, and that adversely affected his take on his job.

He was laid off shortly after getting the job, but didn’t let that dissuade him from pursuing the road to success. Today, Rod is worth about $235 million.

He’s considered by many to be the best James Bond ever to grace the screen. He is also still considered a sex-symbol, despite being 86-years-old. Back in 1944, when he was just 14, he earned his living pushing a barrow at the local Corstorphine Dairy, in a small village west of Edinburgh. The salary back then was 21 shillings per week — that’s roughly £1.05, which today would be the equivalent of around £42, or $54.

For most 14-year-olds, over $200 per month is a nice chunk of change. Still, he went on to become a legend in the acting business, but those early days pushing barrels of milk gave him quite the foundation.

There are some people destined to become a huge success, and you can tell from an early age. Richard Branson clearly had the entrepreneurial spirit from the get-go, and at the age of just 11, he started a small business with his best friend breeding parakeets (known as “budgies” in the UK).

“With my best friend Nik Powell as my partner, we set about breeding budgerigars,” Branson wrote in a 2013 LinkedIn article. “We saw a gap in the market to sell budgies as they were very popular with kids in school at the time.”

Branson says that when he went off to boarding school, rats got to some of the birds. The remaining ones were set free, and he went on to sell Christmas trees, and a student magazine that became the foundation for Virgin Records.

Stephen King is the master of horror, and one of the most famous authors who has ever lived. As a publisher of over 54 novels, inspiring countless movies and TV series, he’s sold over 350 million copies of his books. But his beginnings were humble to say the least.

After graduating from college in 1970, he tried to find work as a teacher, but there were no positions available. After marrying his wife Tabby in 1971, he was desperate for any kind of income to help support her and his children. So, he took a job as a laborer at an industrial laundry, and also moonlighted as a janitor.

It was here that he set up a makeshift desk in the laundry room, between a huge washing machine and dryer, and on his wife’s Olivetti typewriter, wrote stories for Playboy, Cavalier, and Penthouse. And from those small successes, and his wife’s encouragement, he wrote a book — Carrie.

The 44th President of the United States of America honed his charming social skills at an early age. As a teenager, he took a job at the Baskin-Robbins on Honolulu, scooping the 31 flavors daily to lines of hungry patrons.

Sue Thirlwall, brand operating officer for Baskin-Robbins, says that this job builds essential skills for use in later life. “Scooping for America’s favorite neighborhood ice cream shop can result in obtaining basic lifelong job skills, like handling consumer care in real time and keeping calm under pressure,” she told the L.A. Times in 2009

And if you look back on his presidency, even if you did not support him or his party, how often did you see Barack Obama become unhinged, or lose his cool? Maybe we should all take a stint in an ice cream parlor.

Some of the most notable movies of the last decade feature Amy Adams, including The Muppets, Doubt, Man of Steel, American Hustle, and Arrival. But when she graduated high school, she only had one thing on her mind — a car. She was “sick of taking the bus” and found herself in the famous white and orange outfit at Hooters.

“I wasn’t cut out to be a waitress, and I certainly wasn’t cut out to be a Hooters waitress. That was a short-lived ambition,” said Amy of her brief career. She lasted just long enough to raise the money, $900, for her new set of wheels — a Chevrolet. And thankfully for us all, she then pursued a career in acting.