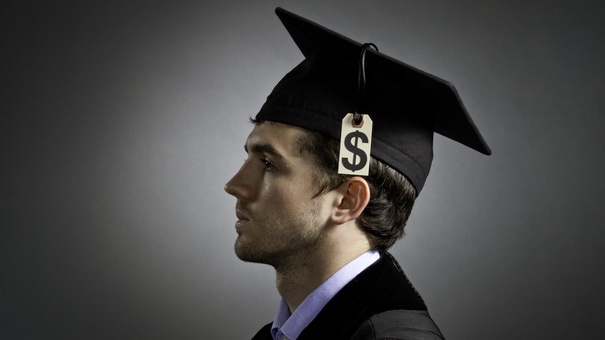 Mike Meru thought he was making a good investment when he borrowed $600,000 to train as an orthodontist. But at age 37, he now owes $1 million — and despite making regular payments, he owes more every single month. In 25 years, his debt will total $2 million.

While seven-figure student debts are still not something you see every day (in a story about Meru, The Wall Street Journal reported that about 100 people are in this boat nationwide), hefty loans are more and more common. Five percent of student loan borrowers now owe more than $100,000, and 170,000 students nationwide owe more than a quarter million in federal loans alone, according to The Brookings Institution.

“They make a lot of money, but not enough to cover that level of debt service,” Hornsby wrote in an article for Business Insider.

If you are contemplating borrowing heavily for college, keep in mind these cautionary tales of how student loan debt can totally derail your life. (See also: 6 Questions to Ask Before Taking Out Student Loans)

1. You may not have the freedom to follow your passion

After getting her bachelor’s degree and spending a year teaching English abroad, Amber Williamson was applying to graduate schools. At 24, she hadn’t yet decided on a career, but she knew her $60,000 in student loan debt limited her choices to only fields that could offer adequate income to make the payments.

“I’m doing everything right, but still being penalized for something I’ve been told to do,” she told MarketWatch.

Williamson is not alone. American Student Assistance found that 53 percent of survey respondents named student loan debt as a top factor in their career choices. Borrowers are often left with little choice but to pursue careers they have no real interest in, purely in search of a paycheck that can help offset their student loan payments. (See also: 15 Ways to Pay Back Student Loans Faster)

2. You may have to move back in with your parents

More than one in three millennials live with Mom and Dad, a phenomenon that’s increased markedly in recent years. The Federal Reserve found that 30 percent of that increase was due to the changing debt loads of young adults, including student loan debt. (See also: 6 Money Moves to Make When You Move Back Home With Your Parents)

3. If you hate your career, you might not be able to escape

Natalie Bacon and Liz Stapleton don’t know each other, but they have one big thing in common: They borrowed buckets of money to get law degrees, only to find out that they hated practicing law. After graduation, Bacon was shocked to realize that interest accruing while she was in school had already ballooned her debt to $200,000.

“I was really irritated and frustrated with the amount of debt I had. I felt like someone should’ve told me what it really meant, or I should’ve had a class on it, or something,” she wrote on her blog.

Stapleton found herself in a similar boat. According to her blog, Less Debt More Wine, Stapleton currently owes $258,000.

Both women took the bold step of quitting their law careers, managing, perhaps ironically, to build careers instead in financial advising and writing about managing their debt. But many other lawyers and doctors remain trapped by their debt in careers that they hate.

4. You will end up paying much more than what you borrowed

During her undergraduate and graduate studies, Becca of Surviving Student Loans knew she was going to have at least $90,000 in debt — but she didn’t think through how the constantly accruing interest would affect that total. For the first three years after graduate school, she made her minimum payments every month. Now, she owes $124,000; about a quarter of that is interest.

“In my head, the debt I took out was going to be my total debt. Boy was I wrong,” she wrote on her blog.

Looking back, Becca doesn’t regret getting her degrees, but she does regret that she lost paid credits several times when she transferred schools. She also wishes she’d put some of the money she’d earned working part-time in school toward her debt, even though it wasn’t required. She’s currently budgeting aggressively and trying to earn money on the side so she can put as much of her $50,000 salary toward debt repayment as possible. (See also: This Is How Student Loan Interest Works)

5. You might not be able to buy a home

Federal Reserve researchers noticed that as homeownership in the United States declined during the financial crisis, young people were especially impacted.

“… Increases in student loan debt might be a key factor pushing homeownership rates down in recent years through effects on borrowers’ ability to qualify for a mortgage and their desire to take on more debt. Corroborating this claim, recent surveys have found that many young individuals view student loan debt as a major impediment to home buying,” the researchers wrote.

They crunched the numbers and found that there is something to this: Every 10 percent increase in student loan debt is correlated with a 1 to 2 percentage point drop in homeownership in the first five years after school.

A joint study by American Student Assistance and the National Association of Realtors found that 83 percent of millennials who don’t own homes blame student debt for their inability to buy. These millennials expected their debt to delay their first home purchase by an average of seven years.

6. It could prevent you from getting married or starting a family

One in five former students puts off marriage due to student loan debt, and nearly one in three postpones starting a family for that reason, American Student Assistance reports.

Some who go ahead and marry a person with a huge student debt load later admit regretting it. One respondent to a BuzzFeed query complained that his wife’s student loan debt was ruining their lives. (See also: How a New Marriage Can Survive Student Loan Debt)

Another American Student Assistance survey found that 62 percent of respondents put off saving for retirement due to student loan debt. Worse, the same report says that the number of people over age 65 who have student debt — some for their children’s education, but mostly for their own — increased by a whopping 977 percent between 2005 and 2015.

One scary thing about owing student loan debt in retirement years: It can lead you to lose your Social Security check. According to the ASA report, more than 173,000 Social Security recipients had their Social Security payments garnished in 2015 for this reason. (See also: How to Keep Student Loans From Wrecking Your Retirement)