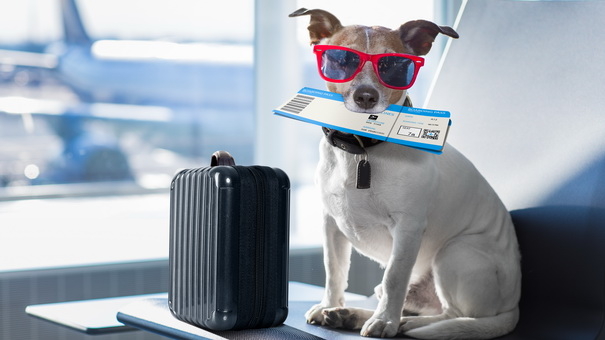 Flying with a pet is a hot topic lately, thanks to various incidents that have been all over the news. Some of the most memorable headlines in the past few years have even gone viral, giving the animals in question an instant dose of fame. There was the woman who caused a stir trying to board a flight with a fully grown peacock at Newark Airport, and a pig named Hobie who was ejected after boarding for defecating on the plane.

But behind all the bizarre headlines, there’s a lingering concern of how to safely travel on a plane with your pet. There are a number of possibilities for animal lovers and their companions to travel together, though the specifics tend to vary from airline to airline, and your destination will have a big impact on it, too. Here’s what you need to know before heading to the airport with Fido.

Check with the airline before booking

Many carriers, particularly on flights departing and arriving within the U.S. and its overseas territories, do allow you to bring animals onboard with you. Domesticated dogs and cats (and sometimes small birds) will be allowed on, though there is usually an extra fee attached, and there’s a limit on the total number of pets per flight. For example, American Airlines charges $125 per carry-on pet. Larger animals will typically need to be boarded with cargo underneath the plane.

Each airline has its own rules about the size, weight, and breed of animal you are permitted to travel with, as well as specific guidelines on how they are to be transported. Because of this, it’s best to check directly with your intended airline before booking the flight. Generally, they must be small enough to fit underneath your seat in a carrier that’s large enough for them to turn around in.

Certify your pet as an Emotional Support Animal

If taking your pet onboard with you is a medical requirement — for example, if you’ve been diagnosed with depression or anxiety — then you should consider getting it classified as an Emotional Support Animal (ESA). If this is the case, and the animal in question helps alleviate symptoms, then you can legitimately get your pet designated as your ESA. Keep in mind, this is not a quick fix or workaround and should only be used in genuine circumstances.

In order to have your pet certified as an ESA, you’ll need to get a letter from a mental health professional. This letter will need to detail your condition, testify to the fact that you are a patient under their care, include the name of your pet, and explain how the pet helps you. (See also: How to Make Your Pet an Official Emotional Support Animal)

Several sites allow you to purchase these kinds of letters online for a fee, with very little process and without ever meeting a medical professional, but many of these services are not legitimate and the letter they provide will not be deemed valid.

Once you have secured this letter, you’re good to go and need to carry it with you to show to the airline crew before boarding. Letters are valid for a year, so they need to be dated when they are issued.

Head to the airport early

The most important step to take when flying with a pet is to contact the airline well in advance to inform them of your plans. This applies whether it’s an ESA or not, so you can avoid any nasty surprises that may prevent you from being able to catch your flight.

On the day of travel, you should arrive early to the airport to allow yourself time to sort out any issues that may arise. Your airline may want to check paperwork; examine, weigh, and measure the pet; or check that the crate or carry case meets their specifications. Animal spots on planes are also often provided on a first come first serve basis, and while it’s unlikely that there will be several other pets onboard, it’s not worth taking the risk. (See also: 23 Tips for Traveling With Pets)

What you need to know about pets flying with cargo

Flying in the cargo hold is the obvious alternative to let you fly with your pet, but it’s one that many people try to avoid. It can be stressful for the dogs, and there have been numerous incidences of animals being lost, injured due to turbulence, or dying due to extreme temperature fluctuations. However, many planes that carry pets keep their luggage compartment pressurized and climate-controlled, as a way to keep pets in the cargo hold more comfortable.

It’s also not free, and the fee attached might be more than the fee to take the pet onboard with you. For larger dogs, you may have no other choice than to put them in the cargo hold. But for smaller pets, it’s a good idea to check fees before you decide which way to take your pet.