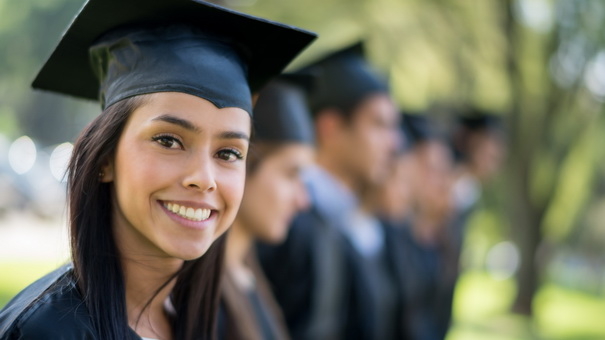 Graduation season brings with it a slew of commencement speeches, all of which tend to repeat the same old cliches about bright futures, following one’s dreams, and how graduation marks a beginning rather than an end. While great commencement speakers find ways to package these old chestnuts in humorous speeches and elegant words, most of these addresses do not offer graduates any actionable advice.

However, some graduation speakers do have excellent words of wisdom to offer new grads. In particular, the following five famous people offered some important money and career tips that graduates (and anyone else watching their speeches) can take to heart.

This spring, comedian Maria Bamford gave one of the most unusual — and helpful — commencement addresses of all time at her alma mater, the University of Minnesota. Bamford used her speech as an opportunity to detail the negotiation process she went through to receive a $10,000 paycheck from the school in exchange for her speech.

The University had originally offered her nothing for the gig, which made her wonder if the school was lowballing her. “Was the University of Minnesota suggesting that I couldn’t get paid for the exact job that I paid them to teach me how to do?” she asked the laughing crowd.

Bamford went on to say that she requested $20,000 before being offered the $10,000 she ultimately accepted. Her business adviser (an aluminum salesman and the father of a friend) wanted her to ask to split the difference at $15,000, but since Bamford is “still from Duluth, and still ashamed,” she accepted the $10,000 — which only netted her $5,000 after taxes and commissions were removed.

This lesson about the importance of getting paid what you are worth became even more concrete for one member of the graduating class. Bamford ended her address by asking graduates who owed money to Sallie Mae to raise their hands, and then asking if there were specifically any theater majors who owed money to Sallie Mae. One theater major in the front row was invited on stage, where Bamford handed over the $5,000 speaking fee check, already made out to Sallie Mae. She told the graduate that it would have been a larger amount, if Bamford had been a better negotiator.

Doubtless, every graduate in the audience came away from that speech with a much better sense of the importance of asking for what they are worth.

Lesson #2: If you worship money, then you will never have enough

The writer David Foster Wallace gave this speech over a decade ago, and it has shown up on lists of best commencement addresses ever since. The overall message of the speech, which is entitled This Is Water, is about being aware of the world around you and the ways in which your thoughts shape your reality. However, in one portion of his address, Wallace talks about how we all worship something, and he cautions against worshipping the wrong thing, including money:

“And the compelling reason for maybe choosing some sort of god or spiritual-type thing to worship … is that pretty much anything else you worship will eat you alive. If you worship money and things, if they are where you tap real meaning in life, then you will never have enough, never feel you have enough. It’s the truth.”

As he acknowledges in the speech itself, Wallace’s message is as old as human storytelling. But the language and stories he uses to get his listeners to understand the power we give to the things we worship can help you to reframe the way you think about money and other worldly things.

Lesson #3: If everyone had a safety net, we would all benefit

Mark Zuckerberg, the founder of Facebook, famously dropped out of Harvard before attaining his degree, leading to his joke that his commencement speech there was the first thing he finished at the university. But his ability to drop out of Harvard and create the juggernaut that is Facebook is partially due to luck — he knew that he had a stable family who could support him. He told the graduates:

“I know a lot of entrepreneurs, and I don’t know a single person who gave up on starting a business because they might not make enough money. But I know lots of people who haven’t pursued dreams because they didn’t have a cushion to fall back on if they failed.

“We all know we don’t succeed just by having a good idea or working hard,” he went on to add. “We succeed by being lucky, too. If I had to support my family growing up instead of having time to code, if I didn’t know I’d be fine if Facebook didn’t work out, I wouldn’t be standing here today.”

Zuckerberg goes on to make the somewhat radical suggestion that people like him should pay for a universal basic income in order to make it possible for proto-entrepreneurs to try and fail without fear of losing everything. This idea may sound strange, but it could allow for huge innovations that could change the world.

Lesson #4: Be brave and just go for it

Reshma Saujani is the founder of Girls Who Code, an organization that works to teach girls computer programming in an effort to increase the number of women working in computer science. Saujani gave a commencement speech the day before Mark Zuckerberg, and she pointed out that more of the world’s current revolutionaries look like him, rather than her:

“I don’t mean any shade to Zuckerberg … But America is a big, beautiful, diverse country … [yet white men have] occupied a platform that the rest of us haven’t had access to.”

Saujani goes on to state that our society trains boys to be brave, and girls to be perfect, which means girls are kicking butt and taking names in the classroom, but less likely to be revolutionaries in the real world. So we need more women to focus on being brave rather than being perfect.

This is excellent advice for anyone who fears failure, no matter their gender or skin color. Saujani has reminded graduates that waiting for the perfect moment or trying to be perfect is the enemy of innovation. Just going for it, like Zuckerberg did and many white guys have done before him, is something that all people should embrace.

Lesson #5: Prepare for failure when you take risks

Writer and surgeon Atul Gawande took on the common-but-meaningless graduation cliché about embracing risks in his 2014 commencement address to Williams College. While it is all well and good to recognize that risks are necessary to reach your goals, it can be difficult to know how to mitigate the damage if the risk doesn’t turn out in your favor.

To help grads understand what we can do to protect ourselves from risk, Gawande explained how surgeons are able to protect their patients from unanticipated complications on the operating table:

“Scientists have given a new name to the deaths that occur in surgery after something goes wrong — whether it is an infection or some bizarre twist of the stomach. They call them a ‘Failure to Rescue.’ More than anything, this is what distinguished the great from the mediocre. They didn’t fail less. They rescued more.”

Gawande went on to explain that there are three pitfalls to avoid when things go wrong: the wrong plan, an inadequate plan, and no plan at all. The secret to taking risks without losing your shirt (or your patient) is to make sure you recognize that failure is a possibility, and be prepared for it. Otherwise, you fail to rescue yourself, which compounds the failure.

Ultimately, recognizing the possibility of failure and preparing for it will make it less likely that you will fail.