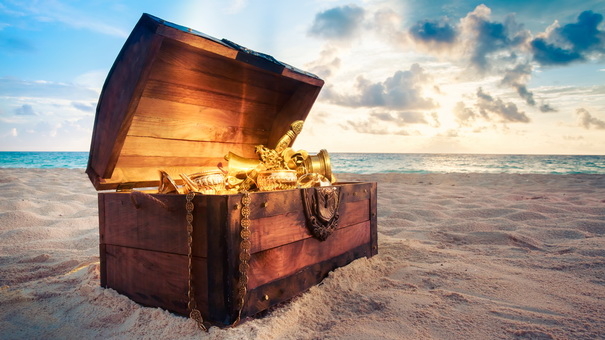 Most of us have had the fantasy of discovering hidden treasure. Maybe it’s digging in the backyard and unearthing a chest of gold, or it washes up on the beach. However it happens in your mind, finding treasure and living happily ever after is the end of the story. But what about the costs and legalities involved? How much of that treasure would you actually get to keep?

First, can you legally keep the treasure?

“Finders keepers, losers weepers.” Is that an accurate description of the law when it comes to treasure, or finding anything of value? Well, yes and no. United States common law dictates that a treasure trove belongs to the finder. However, there are discrepancies to this in some states.

For example, Texas does not recognize the common law regarding treasure troves. In Louisiana, found treasure must be split between the finder and the property owner. In Tennessee and Idaho, the treasure belongs to the landowner.

In other states, you are required to make a reasonable effort to return found treasure to the rightful owner, which includes first taking it to the local police. If no one claims the find after a certain time period, it’s yours. If you find treasure and do not report it or make efforts to return it to a rightful owner, you can be found guilty of theft. What’s more, if the gold you find was due to criminal activity, it could well be claimed by the state if the rightful owner cannot be found.

So, make sure you are free and clear in the eyes of the law before you think of spending a cent from that chest of gold.

How much of the treasure will be yours to own?

Again, this is going to vary depending on what you found and where you found it. Look at the example of the Schmitt family and the treasure chest they found on a shipwreck in 2015.

Filled with gold and coins valued at over $1 million, it would seem they hit the jackpot. However, the haul was discovered on a wreck off the coast of Florida. By law, the state collected 20 percent of that $1 million, and as the wreck was owned by a company called Queens Jewels, LLC, the remaining gold had to be split 50-50 between that company and the Schmitts. That reduced their $1 million find to $400,000.

You may get lucky and find your treasure on a piece of land not owned by anyone, and live in a state that abides by the treasure trove law. But guess what? You still have to pay Uncle Sam …

That treasure chest’s value must be reported to the IRS

Taxes: It’s a dirty word at the best of times, but it can really cast a dark cloud over your haul. IRS code section 61 states that “gross income means all income from whatever source derived.” While the tax code does not specifically call out buried treasure, it has been left broad enough to collect taxes on whatever the IRS deems to be income. And you can bet a find of valuable gold coins or jewels will make the IRS sit up and take notice. You can look for legal deductions to reduce your tax burden, but don’t avoid paying it altogether. If you are living a Champagne lifestyle on a beer budget, the IRS will become suspicious. (See also: 35 Bizarre Things You Can Be Taxed On)

Know what you’re selling, and how to sell it

So, you’ve gone through all the steps, and the treasure chest is yours. It’s time to sell the gold and pocket the cash, and you know you will have to report that money to the IRS. What are your options?

For a start, you need to know exactly what it is that you’re selling. Not all gold coins and jewelry are made alike. In some instances, you may have a very valuable artifact that has historical significance, or was made by a highly-prized designer. In that case, the object will be worth much more than the going rate for an ounce of gold. If you have these items appraised, and they are indeed collector’s pieces, you will most likely have to put the object up for auction. In that case, the auction house will take a percentage of the final value.

If, on the other hand, it’s simply a bunch of gold that is worth the going market price, you should find legitimate sales avenues. The first place to go is a reputable jeweler in your area. Their main source of income comes from selling jewels, not trading in gold, and they will be less likely to rip you off. Avoid those “cash for gold” places; they will try to give you the least possible amount of money for your trade. The same is true of pawn stores. The owners aren’t knowledgeable in what you have, and just want to buy low and sell high. Also, do your homework. What kind of gold do you have? If it’s 24 carat gold, it will get the highest value.

A box of treasure is a lucky find however you slice it — but you will not get to keep the whole amount unless you’re intent on breaking the law and accepting the consequences.